On November 28, the Japanese Language Department at the MCU’s Institute of Foreign Languages held an online seminar “How to Manage Writing of Compositions: Secrets of Creating Texts for Oral and Written Presentations” by Koji Oikawa.

28 professors of Japanese from numerous Russia’s cities participated in the workshop and learned efficient schemes of writing compositions as well as techniques of developing speaking skills and preparing students for oral presentations. After the workshop, the participants thanked Koji Oikawa for his valuable advice and shared their experiences during the group discussion. Koji Oikawa expressed his hope to give an in-person lecture at MCU after the pandemic.

Koji Oikawa has taught Japanese to international students, given public lectures, workshops, and lessons on Japanese for 20 years in 33 countries. More than 150 000 people attended events with his participation. He is awarded by the Ministry of Foreign Affairs of Japan and the Agency for Cultural Affairs for his educational and popularization activities as well as included in the list “100 Japanese People the World Respects” (Newsweek Japan Version). 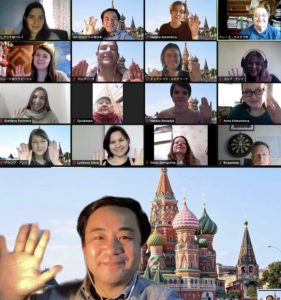