The autumn semester at MCU starts with a series of open lectures and seminars held by visiting professors from the UK universities arranged in cooperation with Moscow State University.

On September 18, Professor Richard Coates, a renowned researcher, linguist, and expert of onomastics from University of the West of England will hold a lecture dedicated to place-names in Roman Britain.

Professor’s academic interests lie in the fields of proper names, historical linguistics in general, the philology of the Germanic, Romance and Celtic languages. He has written books on the names of the Channel Islands, the local place-names of St Kilda, Hampshire and Sussex, the dialect of Sussex, as well as over 500 academic articles, notes, and collections on related topics. His main contribution to linguistic theory is The Pragmatic Theory of Properhood, set out in a number of articles since 2000.

The most recent authoritative survey volume on place-names in Roman Britain was published by A. L. F. Rivet and Colin Smith in 1979. In the 40 years which have passed since then, a substantial amount of new work has been done on the body of mainly British Celtic evidence which they assembled and analysed.

In this lecture Professor Richard Coates will discuss

Join other lectures by Professor Coates: The historical trajectory of naming in particular categories: a general hypothesis, The Family Names of the United Kingdom (FaNUK) project: retrospect and prospect. 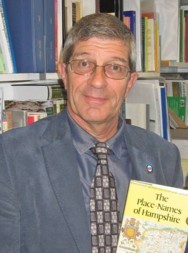