In March 2020, the Embassy of Belgium in Moscow held a competition in poetry translation. The participants translated the poem “Fragments d’une autobiographie” by the Belgian poet Liliane Wouters, to Russian.

Firstly, contest works were chosen in the MCU’s Institute of Foreign Languages and submitted to the Embassy of Belgium. Then, the Embassy selected the winners among students of Moscow universities. Students of the Department of Romance Philology won prizes in the competition. Julia Il’ina took second place, and Inna Kotova is the third-place winner.

Due to the pandemic, the award ceremony was postponed. Mr. Marc Michielsen, Ambassador of the Kingdom of Belgium, invited the winners and university representatives to the Embassy on December 23, 2020. The awardees presented their translations and received prizes and diplomas.

We congratulate Julia and Inna on the victory and wish them success in their studies!

Department of Romance Philology has been partnering with the Embassy of Belgium for a long time. Olivier Danenberg, the First Secretary of the Embassy, and Elena Galkina of the Embassy’s Politics, Media, and Culture Department visited Moscow City University in December 2019. 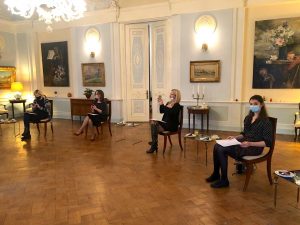