Today I have won the bronze medal in the clean and jerk at the European Championships. For me, it is a success, though I was hoping for more. I could have lifted more and taken a higher place. However, it didn’t happen as I made a mistake in the first clean and jerk attempt. It is all my fault that I couldn’t give it all. Maybe, I was not tuned right.

198 kg in the third attempt is not my limit, but the coaching staff has decided to try this weight and reinforce the fourth place.

Roman Chepik is enrolled in the Master’s degree program “Complex Scientific Support for Sports Teams” at the MCU’s Institute of Natural Sciences and Sports Technologies. The athlete holds Russian national records in the clean and jerk (200 kg), the clean and press (164 kg), and the total (364 kg). 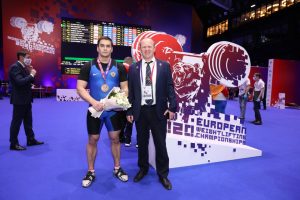