On February 9, the MCU’s Institute of Foreign Languages started a series of online lectures for MCU students and staff.  Mr. Jun Yue, a former locally engaged staff at the U.S. Consulate General in Wuhan, interpreter of English and Chinese, presented the first of his two public lectures. The lecture was dedicated to the U.S. Public Diplomacy in China at the Most Grassroot Level.

Primarily, Jun Yue explained the definition and concept of public or people’s diplomacy. Public diplomacy is generally seen as a soft power to disseminate a country’s culture around the world and establish intercultural bonds. Further, the speaker elaborated on the history of U.S. public diplomacy. Though the term was introduced in the 1960s, Americans initiated to practice it much earlier. By 2021, the U.S. mission in China has disposed of five representative offices, with the Embassy in Beijing and four Consulates General in Chinese provinces. They are responsible for diverse fields of international relations and implement a wide range of cultural programs.

After the lecture, the speaker answered questions from students and professors. They were interested in the benefits the U.S. gets from cultural diplomacy in China. Annually, thousands of exchange students travel to both countries. They get familiar with local cultures and represent their ones. It facilitates the reinforcement of intercultural and international relations between China and the U.S. It is of extreme importance as for many decades the countries have had diverse views on world politics. Another question concerned fields of study most suitable for a diplomatic career. The speaker underlined that people of different educational backgrounds can contribute to publiс diplomacy as there are as many directions of cooperation as science sectors.

The next lecture will be held on February 22. Jun Yue will cover his experience of the global voyage on a humanitarian mission.

Mr. Jun Yue worked for the U.S. Consulate General in Wuhan in 2016—2018. He was hired by the public affairs section as a Cultural Affairs Assistant. There, the speaker was responsible for cultural diplomacy programming and U.S. higher education promotion. 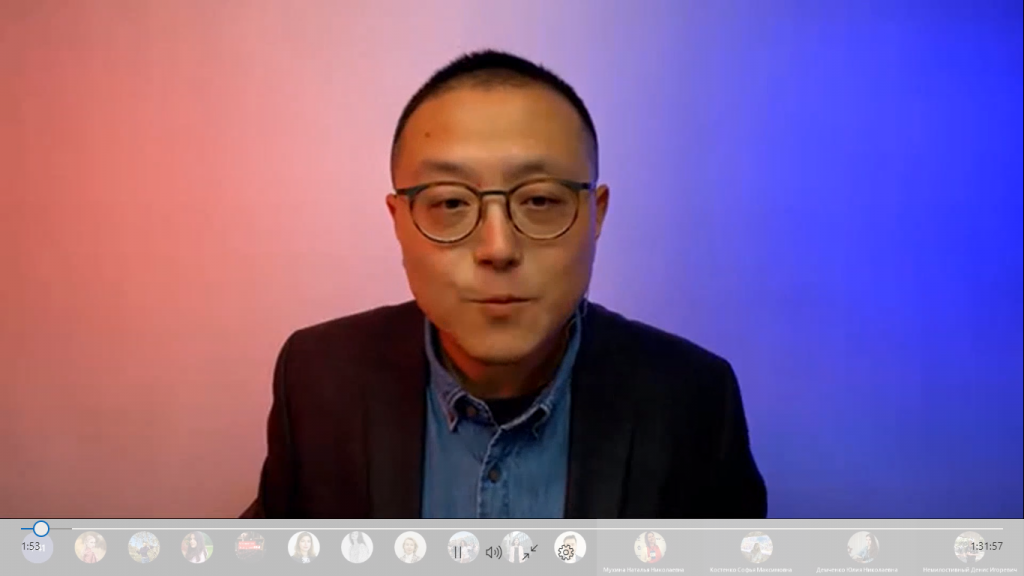 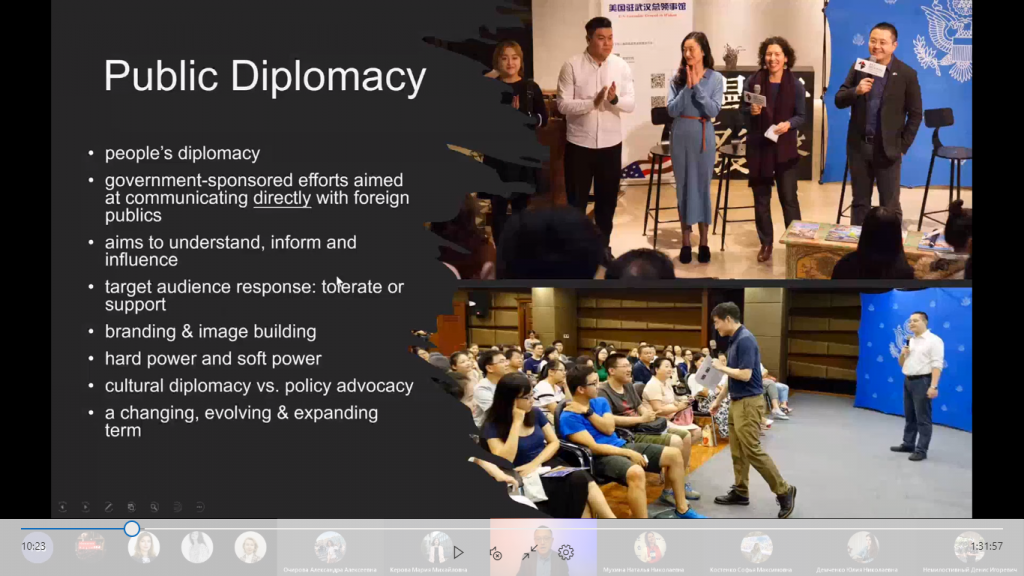 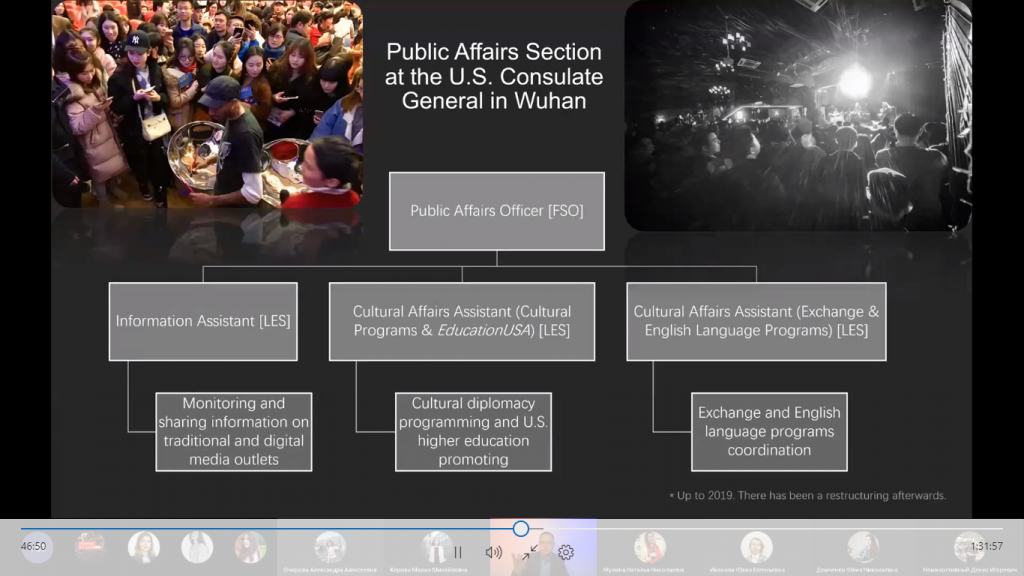 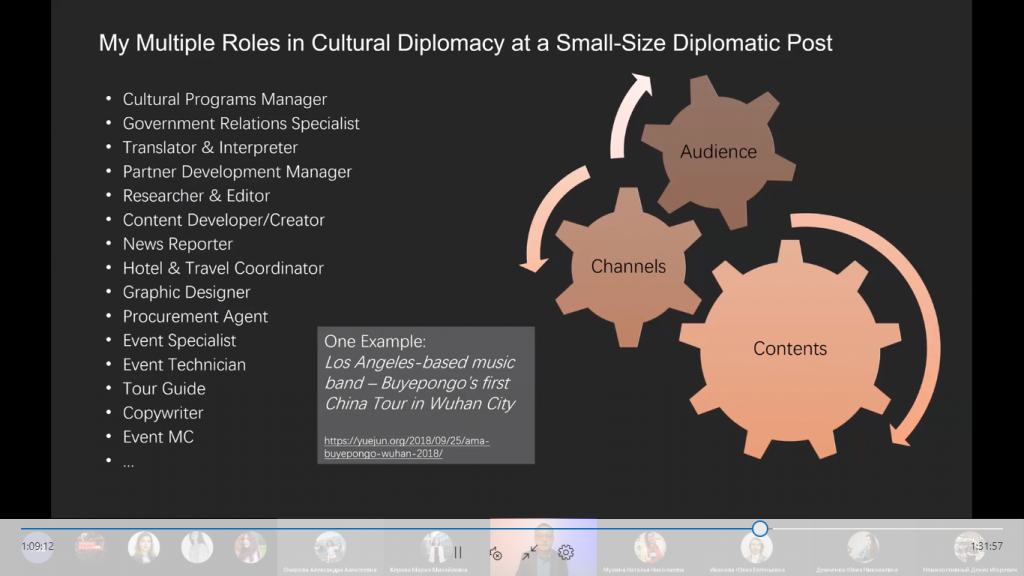 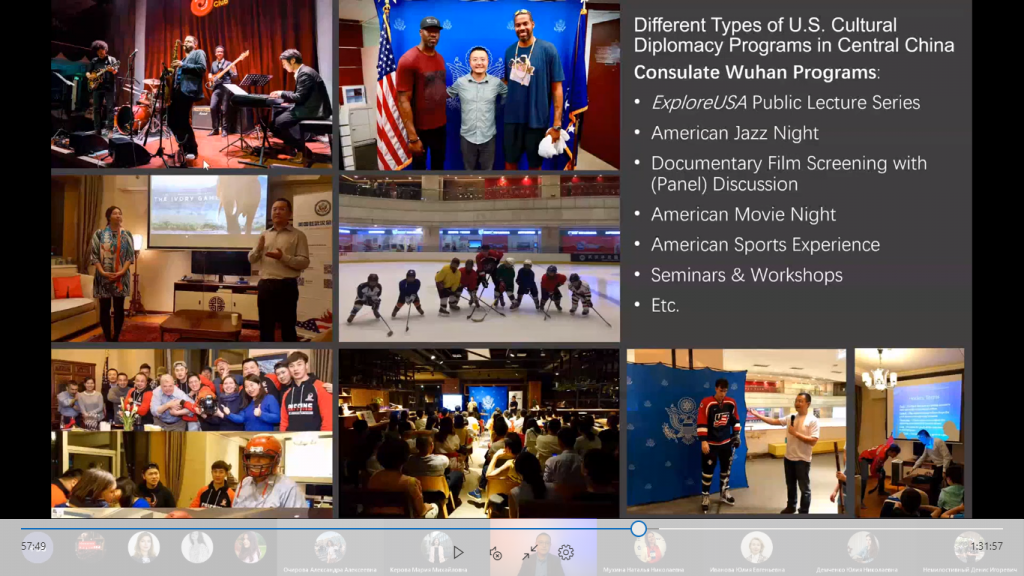