Professor of the MCU’s Chinese Language Department Vladimir Kurdyumov paid an academic visit to Taiwanese universities. On November 23–24, Professor visited National Taitung University where he presented lectures on Russia and its culture and held a meeting with students. Professor Kurdyumov also conducted negotiations with NTTU’s President Yew-Min Tzeng, Head of the Department of Chinese Language and Literature Dong Joo-min, and Director of the Chinese Teaching Center Fu Jigong.

In 2019, MCU and NTTU signed a cooperation agreement. The parties emphasized that the cooperation between the universities has been developing successfully and vigorously. In the 2019/20 academic year, students of the MCU’s Chinese Language Department undertook a one-year language internship at NTTU. MCU has also designed language courses for NTTU’s students and received NTTU’s graduate students as teachers of Chinese.

This year, due to the pandemic a number of full-time programs have been suspended, and this fact highlighted the importance of network communication. Taking this into consideration, the negotiations have charted the prospects and partnership for the next years. NTTU suggested that MCU’s students take the online programs at NTTU, and NTTU graduate students undertake online teaching internship at MCU. The parties proposed both full-time and distance learning programs for the 2021/22 academic year. An academic visit of a delegation from MCU to NTTU has also been projected. 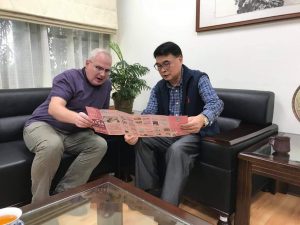 The following visit of Professor was at National Ilan University. There he discussed the prospects of cooperation between the universities with President Po-Ching Wu. Professor also negotiated with Director of the Division of International Cooperations Caroline Wu and Chairman of the Department of Foreign Languages and Literature Pascal Lai. The parties mentioned that the universities will commence student exchange programs and ILU students will use an opportunity of teaching internships at MCU when the pandemiс is over. Professor Kurdyumov also presented a lecture to students of the Department of Foreign Languages and Literature. 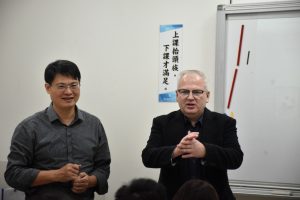