160 athletes from 22 countries have participated in the Aerobic Gymnastics World Championships. World-class athlete Ilya Ostapenko, a first-year master student at the MCU’s Institute of Natural Sciences and Sports Technologies, has joined the winning team.

He has participated in three disciplines: individual performance, group performance, and aerobic dance. In the latter, Ilya has taken a silver medal. The athlete has previously won the World and European Championships, European Olympic Games, and Russian Championships. And now he has confirmed his high qualification and mastery with his silver medal in aerobic dance and the gold one in the team total.

Besides, Denis Soloviev, an alumnus of the MCU’s Institute of Natural Sciences and Sports Technologies, has commented on the TV broadcasting of the competitions. Denis Soloviev is an honored master of sports, a winner of the World and European Championships, European Olympic Games, and Russian Championships. 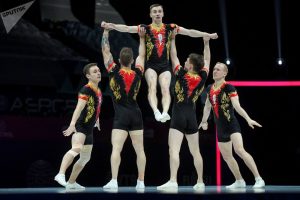