On October 30, the TASS Press Centre presented the results of the annual monitoring of the quality of admission to the Russian universities.

The monitoring has been conducted by the Higher School of Economics since 2010 and serves as an important indicator for both the quality of knowledge of the first-year students and the reputation of universities. According to the monitoring results of 2019, the high-score admissions rate of over 80 was achieved by 54 universities (the rate is calculated on the basis of the average exam score of the applicants for state-funded places).

MCU entered the ranking with the average score of 82.6, becoming the 1st among Russian teachers’ training universities in terms of admission quality.

For the first time in the history of the Russian higher education, those enrolled at the state-funded places were mostly honors students who scored 70 points or higher at the unified state examination.

According to Yaroslav Kuzminov, this is a very important result, which indicates a significant improvement in the quality of knowledge of the graduates of comprehensive schools and their greater adaptation to the procedures of the unified state examination. The number of honors students enrolled at the fee-paying places turned out to be an absolute record as well – in 2019 they comprised 30 %.

MCU Rector Igor Remorenko noted that the demand for a new teachers’ training system aimed at the development of human potential is a current trend. To illustrate this, he showed a graph comparing the dynamics of the quality of state-funded admissions at MCU and at the Gubkin National University for Oil and Gas. 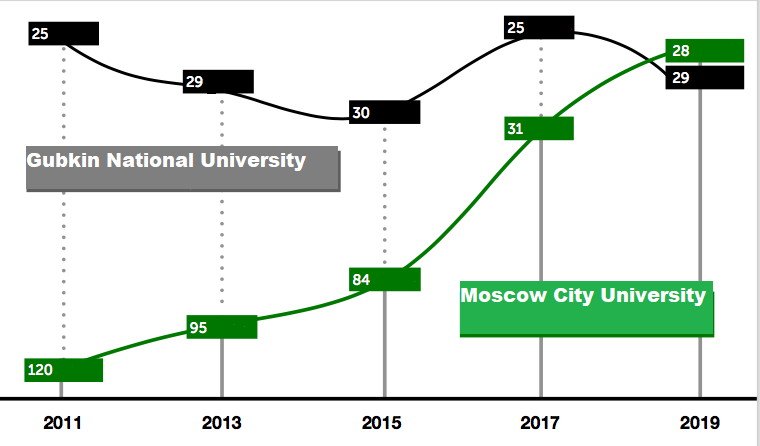 According to Igor Remorenko, the growing popularity of teacher education is associated with several factors: